We have a problem
A disproportionate number of students of color, especially African-American male youth, are disciplined at school or are referred into the juvenile justice system, according to Polk County data.

Let’s Talk is a program formed by caring community members, including former social workers, attorneys, judges and pastors, who came together to be part of the solution.

Working through the interfaith organization AMOS, A Mid-Iowa Organizing Strategy, and its Juvenile Justice team, the Let’s Talk team piloted restorative justice practices in six Des Moines Public Schools (DMPS) middle schools to make an impact – and it worked. In five of the six programs, reductions in out of school suspensions were seen for kids of color (2014-2015 school year). 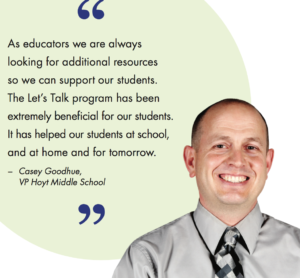